What is it about colder weather that makes you want all sort of hot beverages? I love coffee (like my Pumpkin Spice Latte) - a lot - probably too much actually.

I drink copious amounts of it. However, when Fall rolls around and is in full swing, I really enjoy some other hot drinks .... pumpkin spice lattes, hot cocoa, warm spiced cider, and chai tea!

For the most part, you will never see me drinking those drinks when it's warm outside - and I'm guessing most people don't! 😉 I was introduced to chai tea a few years ago - and I have been hooked (seasonally) since then!

Some of the regular readers of my blog know I have some sort of obsession with poke cakes. I love them and have various different combinations of flavors in my head.

They're so easy to make and the flavors are only limited by your imagination! I wanted to see if I could make a Chai Spice Poke Cake - and was thrilled with the results. Definitely a perfect poke cake for late Fall and into Winter.

Although this cake isn't from a mix, it's still super easy to make.

I do get a little help from the instant pudding mix - but I doctor it up to give it a chai twist! I hope you enjoy this as much as we did!

If you're looking for something a little non-traditional for dessert this Thanksgiving, this is a great recipe! 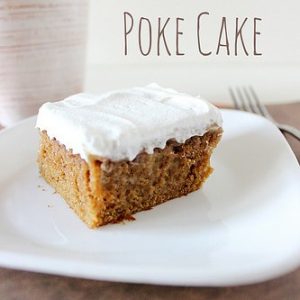 This recipe was contributed by Jamie at LoveBakesGoodCakes.com!

Thanks so much for stopping by! You can find even more poke cake yumminess over on my blog! Here are two others you may love!

The Ode to Elvis Poke Cake