As I sit to write this week's article it is 24 degrees fahrenheit outside.  It is cold and gray.  I'm not usually a beach girl, but right now sun and sand and blue skies sound really nice.  And so do conch, barbacoa, Cuban sandwiches, Key lime pie, paella, and rum runners.  Yes, today I'm dreaming of running away to the southernmost point of the country and eating in Key West.

Key West Specialties and Where to Eat and Drink 'Em:

All Things "Conch" at the Cracked Conch Cafe:

The Cracked Conch Cafe offers all of these and more in their simple down home, 1950's Key West atmosphere--no frills, just good food under whirling ceiling fans.

The oldest eating "joint" in the Keys, Pepe's has been in operation since 1909, when it was opened by José “Pepe” Pelaez.  Back in those days he offered homemade cakes and ham prepared by his wife Ellie.  It is one of the many restaurants in Key West claiming Ernest Hemingway as a patron back in the day.  Today they still offer home cooking and what some claim is the best Key lime pie in the Keys.

Key lime pie is traditionally made with Key limes--a tarter and more aromatic lime than the more common Persian lime found in American grocery stores.  Key lime pie is a custard pie made with the Key lime juice, egg yolks, sweetened and condensed milk in a pie crust, often topped with meringue.

Sunday nights are Bar-B-Que nights.  And what is more appropriate than to have barbecue in the Keys?  Barbecue is said to have to have originated in the Caribbean as "barbacoa," meats wrapped in leaves and  steamed in pits.

Grunts and Grits at the Hungry Tarpon:

The "grunt" is one of the most common fish off of the Key West docks.    It is named for the grunting noise that it makes and is said to be like a small snapper.  Grunts and grits was a popular dish at the turn of the century among the poorer folks of the Keys.  The dish consists of hominy grits, grunts, bacon, eggs, and sometimes tomato and avocado.  What better place to get grunts and grits than the Hungry Tarpon Cafe--a self-identified "fish Shack." 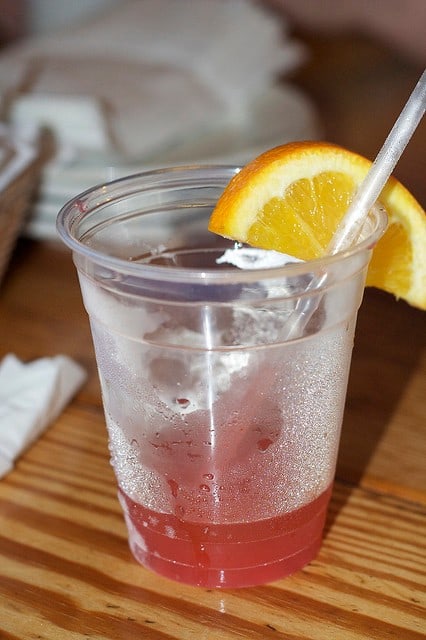 According to legend the rum runner was first concocted in the Keys in the 1950's. Consisting of  pineapple juice, orange juice, blackberry liqueur, banana liqueur, light and dark rum, and a splash of grenadine, this is the taste of the Keys, of warm weather, beaches, and sunshine.  It is named for the smugglers of beer and rum from Cuba during prohibition, so where better to enjoy it than Sloppy Joe's Bar?

Back in the day one of the patrons of the bar was the infamous rum runner Habana Joe.  Another famous patron was Ernest Hemingway who is said to responsible for the establishment's name due to taunting the owner, José (Joe) García Río, for running a "sloppy" place.  These days the bar is the site of the Ernest Hemingway look-alike contest started in 1981, usually held in mid July during "Hemingway Days".  In 2006 Sloppy Joe's was added to the National Register of Historic Places.

El Siboney Restaurant  is named for one of the two indigenous tribes of Cuba.  Operating since 1984 the restaurant is run by the De La Cruz family and since 1993 has been named Key West's Best Cuban Restaurant.

Paella Valenciana traditionally consists of white rice, green vegetables, meat (chicken and rabbit), land snails, beans and seasoning such as saffron, rosemary and occasionally lemon.   Paella Valenciana is considered to be the original paella dish from the Valencian region of Spain and travelled to Key West via Cuba.

Another must have is the Cubano, a variation of  the ham and cheese sandwich, originally created in cafes catering to Cuban workers in the early Cuban immigrant communities of Key West and Tampa. The sandwich is made with  ham, roasted pork, Swiss cheese, pickles, mustard, and sometimes salami on Cuban bread.  Order it at El Siboney as the "Cuban Mix."

You might not be able to escape to Key West right now, but why not whip up this super easy Paella and some Rum Runners (Bacardi makes them already mixed) and pretend?

Check out our other Florida Articles:  ESCAPE TO GULF COUNTY FLORIDA THIS WINTER, FLORIDA IS FUN, EAT SEASONABLY IN DECEMBER: ORANGES RECIPE MENU