Epiphany was last week, and while to a lot of people that means the end of Christmas, to many others it means the beginning of Carnival.  And, of course, here in the South when I hear Carnival, I think Mardi Gras and New Orleans.   On Epiphany the fun already started in the Crescent City with one parade in the French Quarter and one Uptown.   If you’re planning on making the trip, here are some tips on where to eat some New Orleans cuisine.

New Orleans Regional Favorites and Where to Eat ‘Em:

Barbecue Shrimp Po Boy at Liuzza’s By The Track:

Liuzza’s By The Track (the horse track that is) is the neighborhood bar that you take your friends to straight from the the airport so they can taste the real deal.   They are known for the barbecue shrimp po boy smothered in what to most of us isn’t really a barbecue sauce at all, but a spicy butter sauce.  No matter what you call it, it is divine, especially when you sop that fresh French bread in it.  Not  in a sandwich mood?–try the gumbo, another specialty they are known for.

Mother’s is know as the home of the best baked ham in NOLA, and the favorite way to eat that ham is on the Ferdi Special.   The Ferdi special was named for Mr. Ferdi, a local merchant and regular patron, who asked for some ham to be added to his roast beef po boy; other people started ordering it and it became a legend.  Opened in 1938, and made famous for it’s po boys by the local US Marines, these days many other NOLA specialties have been added–so order up some jambalaya or Shrimp Creole if that’s your pleasure. 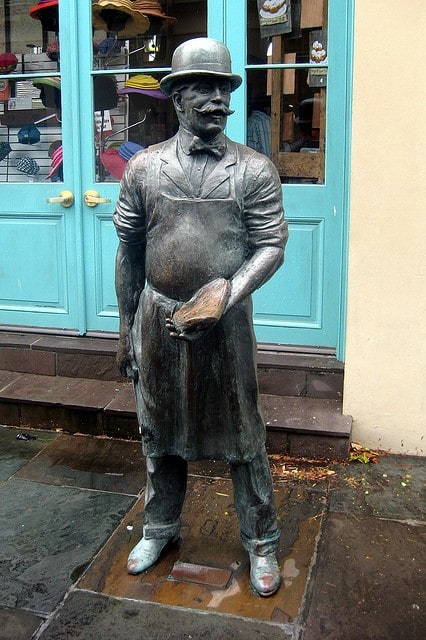 Jacques the Butcher in the French Market

The Crescent City Steakhouse claims to have originated New Orleans style steak (steaks cooked sizzling in butter), and it might even be true.  They’ve been around since 1934 when the restaurant was opened by Croatian immigrant John Vojkovich.  The steakhouse is still family run.  Enjoy your steak in private curtained booths with potatoes (of course): au gratin, french fried, German fries, Lyonnaise, Brabant, cottage fries, or shoestring–all hand cut and prepared daily.  But if you go on Fat Tuesday, be prepared for the crowds of people who are eating their last steak before Lent begins on Ash Wednesday.

Provino and Lisa Mosca opened Mosca’s Restaurant in 1946.  This is where you want to go to try Italian Creole, a cuisine developed when the Italians began to migrate to NOLA in the 1880s.   From the Italians the Creoles learned a love of garlic.  And what better way to enjoy garlic than in Spaghetti Bordelaise, which is nothing like the classic French sauce, instead it is composed of  olive oil, garlic, thyme, bay, lemon juice, butter and parsley.  Don’t forget to try try the Oysters Mosca, another house specialty.

Middendorf’s is actually a 45 minute drive outside of New Orleans in Manchac, deep in swamp country.  Louis and Josie Middendorf opened the restaurant July 4, 1934 with a $500.00 bonus that all veterans of WWI received from the US government that year.  This restaurant out in the swamp has hosted such disparate people as Prince Albert of Monaco and Peyton Manning.  Eighty years later the restaurant is still serving “Mama Josie’s” home cooked recipes, including their famous thin fried catfish.  Don’t forget to try the frog legs!

Not going to make it to NOLA this year?–here’s my Mother-in-Law’s recipe (method?) for cooking Southern style catfish