Drying fresh meat into Jerky was the only way to prevent it from spoiling for most of human history. Nowadays, there are already a lot of meat preservation methods (freezing, adding chemicals, and the list goes on) but many people still enjoy the flavor and convenience of jerky.

If you like to can or preserve food like our Strawberry Jam or Canned Tomatoes, you'll enjoy making beef jerky as well.

We're going to tell you how to make a Jerky. Beef Jerky to be exact.

A bit of trivia here. Did you know that the word “jerky” comes from a South American native tribe called the Quechua, originally part of the ancient Inca empire, as early as 1550. They called it ch'arki, which means “to burn (meat)”. The Quechua used meat from the alpaca and llamas that was boned and defatted, cut into slices and pounded thin, and rubbed with salt. The meat was then sun dried or smoked over a fire.

Eating healthy, high-protein food is all the rage. Beef Jerky is also a healthy source of protein because moisture and more importantly fat must be removed from the meat.

You can find many artisan brands of beef jerky out there but preparing your own is relatively quick and easy. For the new wave of modern day cavemen, follow these steps and make your own Beef Jerky in the comfort of your home. 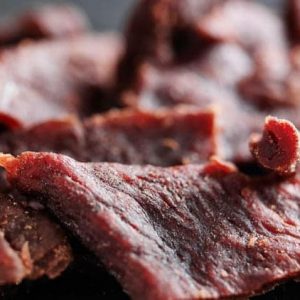 All She Cooks
Learn how to make beef jerky at home. This is a delicious snack and high in protein which makes it a healthy snack choice.
5 from 1 vote
Print Recipe Pin Recipe Save Recipe Saved!
Cook Time 4 mins
Total Time 4 mins
Course Snack
Cuisine American
Servings 4
Calories 383 kcal