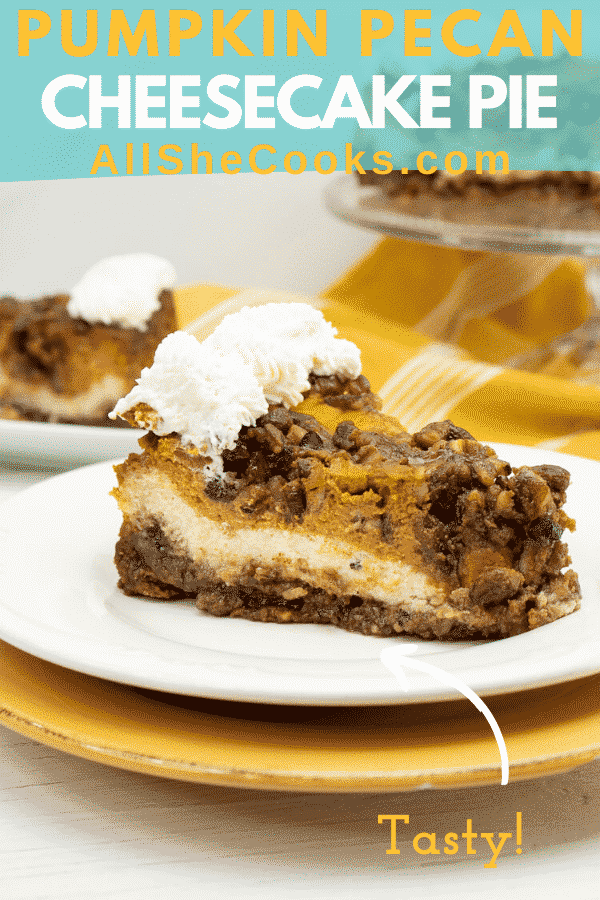 This Layered Pumpkin Cheesecake is packed with Fall flavor from layers of pumpkin pie, cheesecake, and a pecan pie streusel topping. Three classic desserts in one! And it's gluten-free too.

Pumpkin pie is not normally gluten free because of the pie crust that is traditionally used. However, this gluten free pumpkin pie recipe doesn't use that type of pie crust.

Instead, we make a pie crust with ground pecans, which makes this double layer pumpkin pie recipe is naturally gluten free.

If you don't want to make a pecan crust, you could also make a regular pie crust for this recipe. To make it gluten free, use gluten free flour.

How to Make the Gluten-Free Pecan Crust

The pecan crust is easy to make, especially if you have a good food processor. I mixed the crust right in a mixing bowl, but it could actually all be mixed much faster in your food processor.

First, grind up the pecans in the food processor to a coarsely ground consistency. Then, add in melted butter and sugar, and mix together.

Pat the pecan crust mixture down onto the bottom of a greased or sprayed 10 inch springform pan. Then, set it in the freezer and freeze for 10 minutes while preparing the next layer.

How to Make the Cheesecake Layer

Cheesecake is pretty easy to make with just a few basic ingredients. But the trick to a smooth cheesecake is using cream cheese and eggs that are room temperature.

Cream together the cream cheese and sugar and then add in the eggs. It works best to add the eggs one at a time and blend the mixture in between.

Then, mix in the vanilla extract.

Then, freeze for 10-20 minutes while mixing together the next layer.

How to Make the Pumpkin Pie Layer

The top layer of this double layer pumpkin cheesecake is the pumpkin pie layer!

Pumpkin pie is a simple dessert to make. Simply combine the pumpkin, granulated sugar, evaporated milk, eggs, and seasonings. Then spread the pumpkin pie filling over the cheesecake layer.

Now, it's time to partially bake the cheesecake and pumpkin pie layers.

How to Make the Pecan Streusel Layer

The pecan topping is also super easy to make. It's a simple combination of pecans, brown sugar and corn syrup.

Because it is a streusel topping instead of a traditional pecan pie filling, there are no eggs in the topping and less corn syrup is used than would be in a pecan pie.

Once the pie is partially baked, add the streusel over the top of the pumpkin pie filling. Drop spoonfuls of the pecan mixture over the pie. Then, bake for an additional hour.

If you love this double layer pumpkin cheesecake, be sure to check out all my pumpkin dessert recipes, and these other tasty ideas: 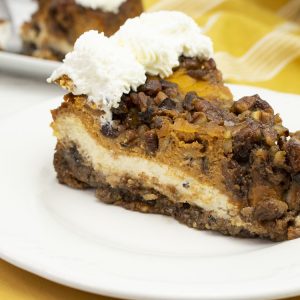