Ready to make our boneless pork ribs crock pot easy recipe? You are going to love how good this recipe tastes and how easy it is to make!

Not only that, but only a few ingredients are needed. While you could make barbecue sauce from scratch, this recipe skips that step. Instead, we decided to make this recipe a quick and easy throw it in the slow cooker and go recipe.

How to Cook Boneless Pork Ribs

There are a lot of popular recipes that are time intensive and require you to bake ribs in the oven and go all out on the cooking process. Which is great when you have time to actually cook pork ribs in the oven.

But when you don't have the time to keep an eye on the oven all day, boneless country style ribs can be whipped up and left to do their slow cooking all day long while you go about your busy schedule.

To make this slow cooker ribs recipe, the first step is to add the ribs to the slow cooker. No searing or pre-cooking required.

Next, top the meat with barbecue sauce mixed with lemon juice. Then, top with sliced onions.

We cook our boneless ribs crock pot recipe on low for about 8 hours because we want the ribs to be nice and tender.

If desired after they are finished cooking in the slow cooker, you can also put the country ribs in a baking pan lined with aluminum foil to broil and get a crisp top. Just brush on some extra BBQ sauce first.

In this recipe, we slow cook the pork ribs for about 8 hours. You can speed up the process a little bit if you cook the ribs on high. However, to get that nice tender boneless rib, slow cooking is the best option. Low and slow is the way to go.

What to Serve with BBQ Ribs

After enjoying a meal of barbecue ribs, a simple dessert is just what is needed. Here are a few you'll want to make:

Cool Strawberry Whipped Dessert | This is a no-bake dessert that is frozen, but so much better than ice cream. Strawberries and an Oreo crust make every bite of this dessert delicious.

Peach Pie Recipe - An Easy and Delicious Dessert | Peaches are so refreshing, and this light dessert is gorgeous and a perfect dessert to serve up to a crowd.

Do I Have to Make BBQ Boneless Pork Ribs

Absolutely not! If you're not a fan of barbecue sauce, you can use a different type of sauce. This is one recipe where a number of sauces could be substituted in. A few that come to mind: Teriyaki, Sweet & Sour, and Jack Daniel's Rib Glaze.

You could also use a combination of a spice rub and a sweet sauce. You don't have to go for the typical BBQ sauce unless you want to.

Get Our 4 Week Meal Plan

How to Use Boneless Pork Ribs Leftovers

If you thought your rib dinner was good, just wait until you make dinner with pork rib leftovers! This is one of those recipes that is perfect for batch cooking.

What is batch cooking? Batch cooking is all about making something one time, like at the beginning of the week, and then using that ingredient for other meals throughout the week.

In this case, depending on the number of people you are feeding, you could make the pork ribs recipe (or double it if needed) and enjoy a tasty rib dinner the first night. The second day, have a BBQ rib sandwich with some sides.

Some other ideas of how to use leftover rib meat: 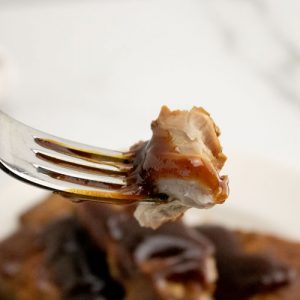 Although removing the lid of the crock usually means an extended cooking time, this recipe calls for it. Making sure you baste the ribs occasionally will keep them from becoming to dry on the bottom and running your meal. It will not extend the above cooking time.